Our 3rd and {hopefully} last child. Not that I’m opposed to having more children. I would like to have more. If..

We had more space.
We had money.
We were a bit younger.

Now.. Let’s begin. I mentioned my 40 week check up. That evening, I lost part of my mucous plug. I thought for sure I would be going into labor but it didn’t happen which was a good thing because the next day was Elisabetta’s birthday. I really didn’t want to be in the hospital on her birthday. Over the weekend, I had no contractions but was slowly losing more of my mucous plug. On Sunday night {the 24th} I lost more mucous but slight, very mild contractions had begun. At 3:30 am {Monday, 25th} labor had officially started with contractions every 15 minutes. They were mild, but strong enough to wake me up and keep me from sleeping. I was up walking, eating and sending emails to my siblings to let them know that it might be time. At 5:30 am, I decided to take a shower and hope that the hot water would help my lower back pain. During this time, I had already let Carlo know that he was not going into work. At 7:30, I decided to try to get some rest and I went back to bed. 2 hours later, I woke up and my contractions had stop.. almost completely. I was not happy. I was already 4 days late and I made my husband stay home. Why the heck did they stop?

I had plans to meet up with friends but cancelled since I was in labor. Since my contractions had stopped, Jill & Flo came by anyway to say goodbye. {They were in town for the weekend and were leaving back to France, Monday evening} After they left, I started to prepare lunch and at 1:30, my contractions started back again. This time about every 10-15 minutes. They started to become regular and then of course stopped. It was very frustrating but anytime I had one, it was getting stronger. I had already told my parents that I would leave for the hospital when my contractions make me cry. That way, I would know that I wouldn’t have to wait too much at the hospital. At 5:15 pm, I told Carlo it was time and we called the cab to take us to the hospital. In the 2 minutes it takes to get there, I received a text from Jill who was at the airport. I updated her quickly and by the time, I put my phone away, we were already at the hospital.

We walked into the ER and went to Triage. Got my paper work and walked up to the 3rd floor. It’s now around 5:30 pm and we waited until they called me into the exam room. After answering all of the multiple questions {again- same as my 40 week check up}, I was examined and I was at 3cm. I really thought I was at least at a 5 but oh well. I changed into my night gown and robe and was taken to the Sala Tracciati. I was strapped and we begun another Fetal Heart Monitor. I think I was monitored for about 20 minutes. Then I got an EKG done. By the time it was all done and Carlo was able to come back into the room it was 7pm. I told him to go downstairs to the Bar and get something to eat. I had noticed that they closed at 8pm and just incase we’d be there all night, I didn’t want him to go hungry.

He said he was ok but I insisted. My contractions were still 10 minutes apart so there was time for him to go and come back. As he left, I got my belongings together and got comfortable. I even took some pictures! A nurse also came in during this time and put in a Hep-Lock but I didn’t receive any IV meds. {yet} 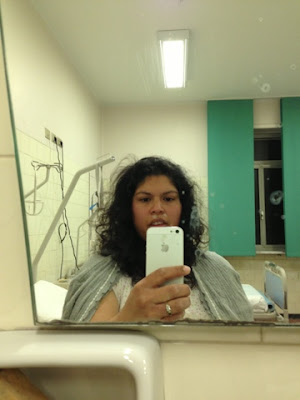 So, the bed on the right side of the picture was mine and this was my room until the following day {if you read my 40 week post, then you’ll remember how I mentioned that they were out of beds a few days ago. Same situation when I showed up.. 4 days later.} 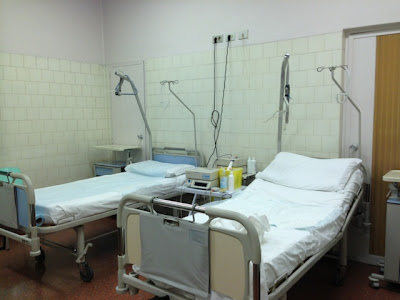 This room, the Sala Tracciati, is where all women get the Fetal Heart Monitors done. Usually sitting in those uncomfortable lounge chairs. They are old and not sturdy at all. Slight movements cause the chair to recline back making it hard for you to sit still. 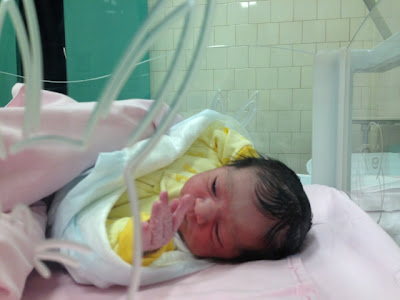