Skip to content
It has been a year since the announcement of a 2nd Apple Store in Torino. The first location is actually at Le Gru which is a shopping center in Gruliasco. With rumors of when the store was going to open, we have been looking forward to this since February. That’s when it all started. I worried that I would be in the hospital with Elisabetta but then they said October would be the actual month.  We have watch scaffolding go up and last Saturday, it finally came down with the arrival of merchandise. (Carlo and I saw tons of boxes being unloaded from the truck while we were on our date.) Once we found out that it was opening today (Saturday, 13 October 2012) we made sure to be there!
As we came from Piazza San Carlo, we could already see the massive crowd that formed the lines.

There were 2 lines. One line was to buy the new iPhone5, which was very short when we arrived. The second was to browse the store and of course that was the longer line.

We had thought that the crowd was small, until we each took turns to see that it was actually very long.

Our girls did a great job of behaving. Valentina even had Space Bubu to keep her company. (her eye looks funky because she has a mosquito bite on the top) 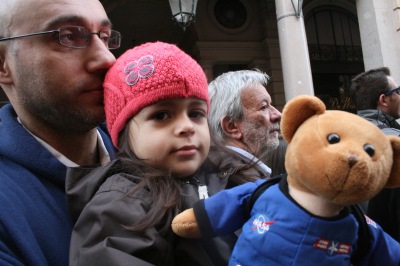 To get the crowd excited, there were several Apple employees outside welcoming everyone and answering questions.

Once the store officially opened, I spotted someone on the roof checking out the action!

And those that didn’t stand in line, watched from across the street to take photos. Most of course used an Apple product.

As we progressed in line, we were able to finally see a little bit of the interior. It’s really nice.

At one point, I had to leave the line and run to the pharmacy to buy some food for Elisabetta and then to a cafe for a snack for Valentina. We honestly thought we would be done by 11:30… and we were wrong. She slept most of the time we waiting and woke up around 11am. She didn’t cry or make a noise the entire time. She was a good girl and waited patiently until noon which is when she had her lunch. 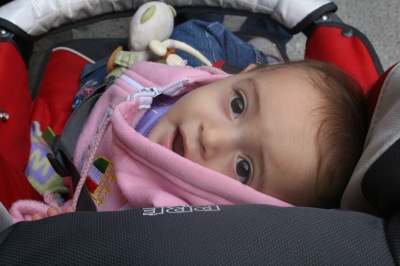 A shipment arrived only an hour after opening. Not sure what it was but I read that there were 1500 iPhone 5’s available to purchase on opening day.

After standing in line for almost 2 hours.. it was finally our turn to go in and be apart of the excitement.

… and we also happen to be among the first 1000 people which meant we got a free t-shirt!!

I’ll just skip commentary for now and let you just browse the pictures. I took over 200… crazy much?!?! 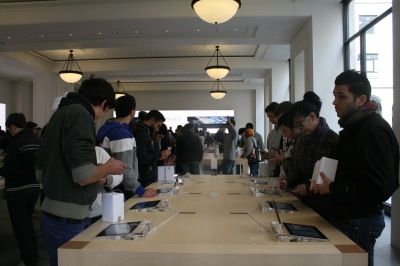 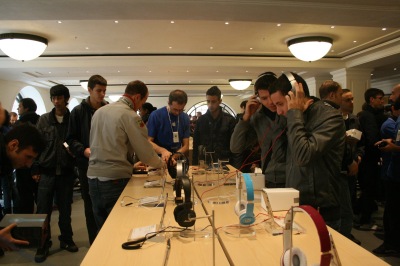 Valentina really enjoyed looking out the window to see all of the people that were still in line. 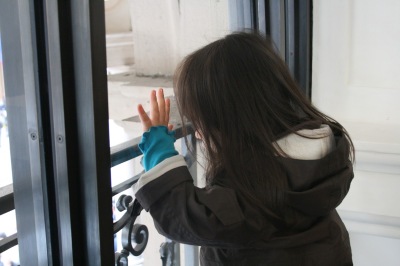 This store is accessible for those in wheelchairs and parents with strollers so it was great to be able to use an elevator to access the 2nd floor. In a corner, there’s a table marked ‘bimbi’… kids. Someone was very happy!

Especially when she saw this Peppa Pig app! She sat a played with the iPad and didn’t say a word.. 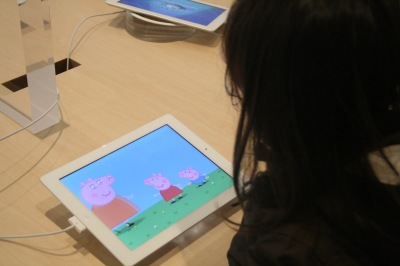 She also found an app for ‘In the Night Garden’.  She liked it so much that I bought it when we got home and put it on her iPod touch.

At this point, we had to leave because it was lunch time for Elisabetta and Valentina was starting to have one of her tantrums. She DID NOT want to leave. 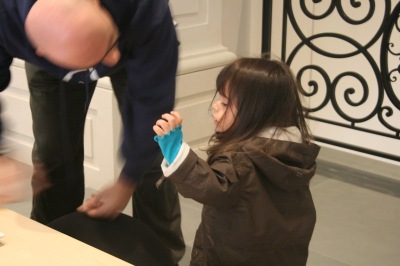 There were lots of photographers around and the girls got their pictures taken quite a few times. I’m pretty sure Elisabetta was the first baby to visit the Apple Store. I haven’t been able to locate those pictures and maybe they won’t be used but I did find us on two other sites!
TorinoToday click here This link will take you to the picture. We’re at the back of the line. You can actually spot Carlo easier than me.
Corriere.it click here – This link takes you to the photo gallery and we’re in the last picture (#10) Again, we’re at the bottom of the photo and you can see Carlo along with Valentina’s pink hat.