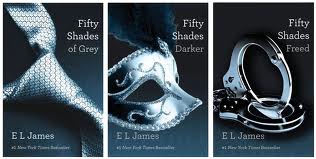 By now, everyone has heard of this book and I (for once) was a head of the game. I had read an article on Yahoo about a library wasn’t going to carry the book because of it’s contents. It didn’t really expand much so I was out of the loop. A few days later, Carlo and I went into town and I wanted to go quickly into the bookstore. I had just finished reading The Help and needed something good. I didn’t want a ChickLit because I usually get mine from Jill once she’s done reading them. Nothing was jumping out at me and I thought maybe… just maybe if I saw the Hunger Games trilogy I’d give in and read it.
Then I saw Fifty Shades. I picked it up, read the synopsis and put it back. I kept looking and I saw Shantaram which is what Carlo had just finished. I went back and forth for about 10 minutes before decided to go ahead at the Fifty Shades of Grey and Shantaram. 2 days later, friends on FB were starting to post about 50. How it was “soooo good” and “dirty and I love it”.  Most of the chatter was like the 2nd example and I thought to myself, “Oh crap… What did I just get?”
My first thought was, “Seriously? Someone in the UK publishing world thought this was good?” The author is British and her characters are American. Her writing style was completely off and I found myself actually saying out loud, “Americans don’t talk like that!” I think that was my biggest beef. If she would have just set her story in London, it would have been much better.
Had I known this was a Twilight Fan fiction BEFORE.. I would NOT have gotten it. I am not a Twilight fan. Haven’t read the books, or seen the movies and I don’t plan to. Again, her writing style is awful that it’s quite comical. It’s uncreative and very repetitive. The “dirty” scenes are the same.. every single time. The first book is practically 20% story and 80% sex. So much that I kept skipping those parts because they were basically the same. She didn’t use different words to describe the scene. Just the same ones over and over and over again.
It was an easy read and I wanted to see how it all played out so I went ahead and got the rest of the trilogy. The 3rd one was the best. It was 80% story and 20% sex. In the end, the story itself wasn’t bad. It could have easily been combined into just one book had it not been for the repetition. Some of the sex scenes were essential to the plot because it explained Christian Grey’s character and why he was that way but it was overload and most of it was very unnecessary.
I’m giving this 4 out of a 10 and suggest that you either borrow from someone or wait till the movie version comes out. (and if they go ahead with this movie…. they really need to tweak the details to make it good)