Skip to content
I started writing this a few days before she turned one month… I just now finished it. 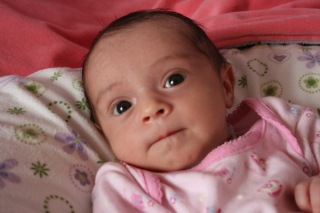 ONE MONTH!! It’s been a whole month since Eli (or Betta as we call her) joined our family. While it seems like yesterday that she was born, it also seems like she’s been with us much longer. This month has been a bit of a struggle. After she was born, I got my milk a few days later and she was nursing well. Or so I thought. She would fall asleep but then cry when I would detach her. When she ate, a lot of the time she would regurgitate. (more than just regular spit up) When we left the hospital, she dropped down to 6 1/2 lbs. The next day, we had to go back to the hospital for a weight check. She had lost a bit more weight and the doctors were concerned that she might have a virus. So while I was in the nursery with the baby, Carlo was made to wait out in the waiting area. They did some blood work and then wanted to do a urine test. So they asked me to nurse her to get her to pee. Eli would nurse and then fall asleep and I kept trying to stimulate her but she would budge.

They kept insisting that maybe I didn’t have milk but I assured them that I did and that I was in severe pain from the amount I had. So they decided to have me pump and feed her with a bottle. They were shocked that after 20 minutes of pumping, I had produced 5oz of milk. (duh.. I said I was full and in pain!!) I fed her and in 5 minutes, she drank 2 oz. Afterwards, they put her back on the scale and she did gain a few grams. They took her away to see if she had peed and when she came back, they put in a bassinet and had it inclined. (To help digest and prevent more regurgitation) At this point, the we discovered that the problem was ME!

I have to use a nipple shield because my kids can’t latch on. I used them with Valentina until she was about 3 months old and then she was able to nurse without problems. So, I was already prepared with to use them with Elisabetta. So what happens is that Eli would latch on to one side and nurse. If I nursed on the other side, she would fall asleep, then cry when I would detach. She would suck so hard to draw out my nipple that it caused me to bleed. (literally a small pool of blood inside the nipple shield). By the time I left the hospital, she was nursing somewhat ok but would throw up a bit.

So, coming to the conclusion that the reason she was throwing up was because she was starving that she would over eat and then of course throw up. (thus, the more then usual weight loss) Since she was falling asleep while nursing, the only solution was to rent a breast pump. The nurse gave me a list of places to rent in the city. I asked if Carlo could join me in so we could talk about all of this. She (the nurse) was going to get Carlo when another nurse protested. So he was still stuck in the waiting area. Since it was a Sunday, we didn’t think there would be anyone open. Carlo called about 10 different places and it was during lunch time so of course, they were all closed. We asked about other options such as artificial milk but they insisted on this breast pump. Luckily, Carlo was able to find a store open that had one available.. only it was on the opposite side of town. After 4 HOURS, we were sent home with no answers as to this “possible virus” or test results. We were NOT happy and to top it off, the Doctor was called into the Delivery area for an emergency delivery. She quickly explained that the test was in a “gray area” so this test was neither positive or negative.

I was supposed to go back on Monday to weigh the baby again. By this time, it was almost 5pm. We hadn’t had lunch and we were expecting company at 6ish. Carlo looked up the location of the store, grabbed a pack of crackers an walked back out the door. I fed the baby again which of course she threw up all her milk. I called the hospital to talk to the nurse who yelled at me for feeding my baby “too soon” even though it was 4 hours after she last ate. A few minutes later, the doctor called my cell and apologized for not being able to talk to us and go into detail. She told me again to keep Eli at in incline while she slept. I explained the recent incident and she said that if  Eli threw up one more time, to go back to the hospital and she would be put under 24 hour observation.

Our friends had come over, and I explained our day and why Carlo wasn’t here to greet them. Carlo was already on his way home with the machine and a pacifier. After a bus and metro ride, Carlo came back close to 7pm. As soon as our company left, I pumped and fed the baby. I fed her about 1/2 oz every 2 hours until our next appointment at the hospital. When we arrived, they weight her and she gained a 1/4 of a pound over night! They wanted to redo the blood work to check the virus at which point I almost lost it. I told them that we had already waited 4 hours the day before for nothing and that I was not going to do that again. They assured me that it was only going to be an hour. So, I waited in the waiting area. An hour later, the doctor came out and said it was a false alarm. She had no virus and the blood work came back normal. The test that was done the day before was in the “gray area” due to an lab error. Basically, Eli was just eating too much, too fast. So the Doctor said to “keep doing what you’re doing” and by the end of the week, Eli was up to 1 1/2 oz a feeding.

At her 2 week check up, she was up to 7lbs. We added artificial milk to her diet because the stress of pumping and trying to find time to pump was (and still is) causing me to lose my milk. I mentioned it to the pediatrician and of course we got the ok to continue and it would also help with her weight gain.

We went back to the pediatrician 2 weeks later and Eli had passed her birth weight. She weighed 8 lbs! I wish I could say that she’s nursing but she’s not. We decided to give her formula and supplement with my milk (instead of the other way around).

She can latch on without the nipple shield on one side but falls asleep after 5 minutes. Then it’s a hard to get her to detach because she wakes up and then really starts to suck hard. If I nurse on the other side with a shield, she falls asleep and gets nothing at all.

At this point I’m only able to pump about 4 oz a day which is barely enough for one feeding. I don’t really have the time or energy to sit and pump for almost an hour just to get half of that amount. I know the more I pump, the more I’ll get but I don’t even have the time to pump. I keep trying to get her to nurse but it’s still a struggle. At this point, I’ve almost given up and I’m ready to just keep buying formula for the next 10.5 months.

One thought on “Eli Kate: Month One”