We’ve returned from our trip to the States. It was exciting and stressful at the same time. I have so many stories and pictures to tell but that would require me to do a lot of back up story telling and I just don’t think I can so…. we’re going to do this the easy way and highlight the several things.  Then I’ll write a proper post for others.

Every morning, Valentina enjoyed a bowl of Cheerios (or bread with Nutella) and mangled this picture of her and Carlo…. 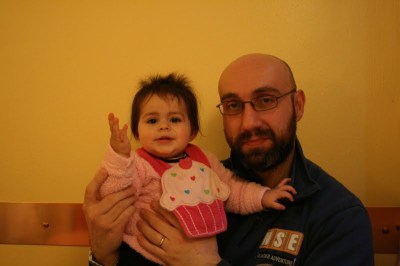 She kissed it, hugged it, waved it around, almost tore it in half and basically wore it out. Every morning. Same routine. “Valentina….. who’s this? “Dada” “Can you give daddy a kiss?.. Good girl.. What about a hug? Daddy wants a big hug.”
Valentina also went swimming for the very first time! We had wanted to put her in swim lessons when she was 3 months but our neighborhood pool was closed because the Olympic team was using it. She had so much fun. She loved splashing around in the wading pool too!

My “big girl” started using a spoon which means she has cereal for breakfast. Which also means… bye bye bottle! I had kept her on the bottle just out of comfort for her. She’d have her breakfast which was milk and cookies. I also didn’t want to bother with it since she would be at the airport or plane during breakfast time so, I let it slide. Once we got to Texas and jet lag was over, the bottle left and never came back! (except for once but she refused it!)

V attended her first parade! The 4th of July parade isn’t fancy but the fact that she was my hometown enjoying something that I have seen and participated in made it special. We made sure that she was all decked out in her Red,White and Blue!

Valentina also celebrated her birthday with another party. This time around it was a traditional american/mexican party. Complete with friends, cousins and a piñata! Poor kid had so much sugar going through her little body and at the end of the day.. she just CRASHED! But it’s ok… your first birthday party should be special! (no matter how many you end up having!)

That pretty much sums up our first week in Texas!  Stay tuned for Part 2 where we’ll be in Minnesota!
To see the complete USA part one album on Facebook click here: trip photos