At 10 months, I do realize that V can chew and eat quite well. After eating pizza, bananas, oranges, bread, prosciutto and potatoes I feel better knowing she ate and didn’t choke.  More importantly, she has decided she’s had enough of baby food… PERIOD.

While she had (in the past) happily eaten her food, it never once bothered her that she wasn’t chewing and that made me feel better. As I mentioned before, she did have some problems with texture and she didn’t care to eat any pasta. Now she wants to eat exactly what you’re eating and she wants to eat it NOW!

I noticed it on the day she turned 10 months.  While she was congested she rejected everything.  At first I thought it was because of her fever and while that may be true, three days later, she was still rejecting most things.  I gave her some fruit in her teething feeder and it was at that point that I realized she was done with baby food. She wants regular food.  So now, we’re focusing on self feeding.

I love that when she does feed herself, she claps as if it’s a major accomplishment…. which it is! She thought she was quite the big girl the other day when she ate her Frittata (egg yolk, pasta & grated parmigiano).  She was clapping after every piece of egg she put in her mouth.  This of course meant that we also had to stop every minute and clap along with her.

Because she is now feeding herself, she takes FOREVER! It’s not a problem for me but Carlo doesn’t like it.  He feels like she’s not eating enough and is losing weight.  I keep telling him that it’s ok because it’s normal and she’ll eat more when she’s ready….. 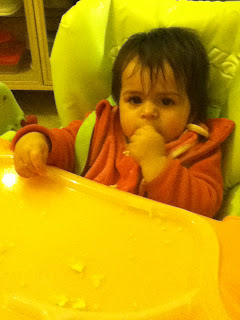 he just wants her to be a “chunky monkey”