Skip to content
My sweet monkey is now 10 months (as of Feb. 22).  I feel like these past few weeks  have just flown by much faster because she seems to be getting bigger every day and changing in every way.

She’s constantly on her feet. She refuses to sit and watch TV, she has to stand and try to peek over the crib/playpen to see the TV.  When she’s actually sitting on our lap, she’ll slide off, stand and take a couple of steps.  Of course, we better follow along or she’ll throw a big fit!!   Since she’s standing more and starting to take some steps, I bought her some “real” shoes with a good hard sole.  She loves these Pumas. She threw a fit at the store when I bought them because she wanted to play with them right away.

One the day she turned 10 months, her 7th tooth came through and I was sure #8 was about to show as well, but we’re still waiting for it.  The next day, she woke up with some nasal congestion and no fever so, we kept our appointment for her vaccinations.  She did great and only cried during the actual injection.  However, that night she did run a fever, congestion was worse and she had a BIG loss of appetite. While the fever lasted until 2 days later, we’re still battling the congestion and her appetite came back.. but only for textured foods.  (more on that subject next week)
We went to the doctor this week for her check up. She had her weight and measurements done along with the general stuff.  The doctor was really impressed that she had grown so much since her last visit.  In fact, she made a comment about V’s chubby belly!  V is usually a good girl at the doctor’s but this time she was fussy and actually kicked the doctor while she was getting her teeth checked. 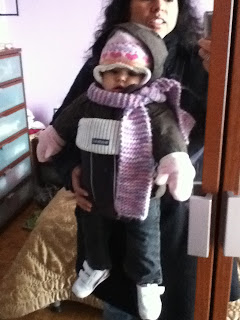 This past week, we also reached another milestone. Valentina said her first Italian words! My MIL comes to babysit and often take V to the balcony or a door, knocks and says, “chi e'” which means, “who is it?” She had repeated it once but as I was skyping with my mom, V kept talking and talking but very clearly said “chi e'” several times.
At 10 months, she’s just a joy to be with and I can’t to see what changes come in the next few weeks! 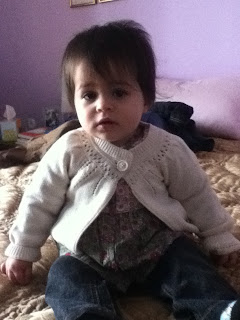