I’m gonna post some things completely out of order but, if I don’t do it now.. I might forget.  Last week, Jill and I had the opportunity to see Lady Gaga in concert.  I was actually really surprised that she was going to be here in Torino and I thought it would be a huge spectacle.  The concert was held at the Palaolimpico which isn’t a big venue.  We had general admission tickets and they were on the floor.  It was my first concert in Italy (as well as Jill’s) so we were a bit shocked at how close we were to the stage.  Usually general admission tickets mean you are at the back of the arena and are usually the worse seating.

We arrived late so that we didn’t have to watch the opening act.. which was the best thing we did because we were not at all impressed by the antics or their vulgar language.

We were however, very impressed with the Barilla PastaCup! 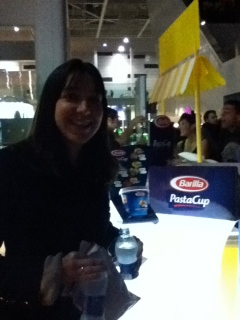 I have never been to a concert where they offered pasta in a cup, or donuts & hot chocolate.
Unfortunately, I didn’t think about bringing a camera to the concert.  I was just so concerned to have my ID and cell phone that I didn’t think about anything else.  So, all of the pictures and video I took were on my iPod touch.  As we were waiting for Gaga, Jill noticed the variety of ages at this concert.  We didn’t see little kids but, from teenager to people in their late 50’s/early 60’s were there.  It was odd.. yet very cool.

As soon as the lights went out, people were screaming, chanting “Gaga” and just plain excited for Lady Gaga.

Jill & I managed to take one picture during the concert. 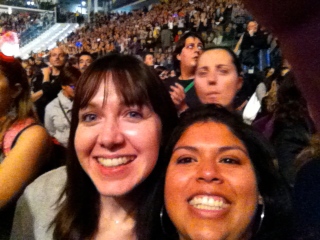 When I first heard Lady Gaga, it was about 2 months before “Just Dance” became a huge hit.  I instantly loved the song and the artist.  I’m not into her crazy outfits but, as a musician/songwriter she is amazingly talented and has a great voice.  I had the best time at the concert and if she come back to Torino I will definitely want to go again!
*this was my first time leaving the baby at home with Carlo…. I was glad to be out but even happier to be back home with my little monkey.

2 thoughts on “gaga for Gaga!”