Seems like just yesterday that we had our house full of visitors.  I’m not going to say that it’s been lonely but there’s not a lot of action going on these days.  I feel like I have so much to tell and not enough time to tell it but, I’ve gotta start sometime or it’ll never get done.  So, here we go…..

Last month, Carlo’s cousin came to visit us.  Her name is Anita and she was born in Italy.  Her mother (sister of Carlo’s mom) married an American who was in the Army.  They had two kids and moved to the States.  The last time they came to visit, Anita was 12 years old.  Fast Forward 33 years and she’s come back to the Motherland to visit her family.  She doesn’t speak any Italian but she can understand quite a bit.  I had never met Anita before but once she walked into the door here at our house, there was an instant family bond.  We had such a great time the first night as we introduced her to Valentina and took her for her 1st gelato.

Anita @ Be Cool (her favorite Gelateria!)
She spent much of her trip with the Aunts & Uncles having dinners, going to the beach and also taking a trip down to Naples to visit more family.

Zia Rosalia, Zio Franco, Zio Salvatore, Zia Anna & Zio Nino
(in Naples)
She also took a trip to Greece (*so very jealous!!!) courtesy of her EMPLOYERS!!  Yes… that’s right.  She has been at the same job for 21 years and her bosses are Greek.  They were going to be there in July and they extended the invitation to her.  She came back with a tan and some of the most gorgeous pictures I’ve ever seen!

(love this picture of her!!) 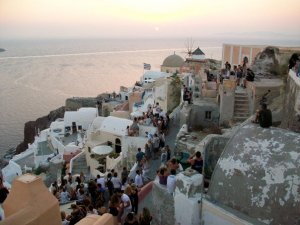 After Greece, she came back to Torino and spent her last few days with us.  I also had another visitor with us while she was in Greece.  One of my best friends, Dulce, came to visit us and was still here when Anita came back.  It’s a good thing they bonded instantly since they had to share a room and a bed!

Dulce & Anita
We were so happy to have Anita here with us.  It was nice to finally be able to meet her and thank her for the gifts she had sent (and brought with her) for Valentina.  She’s promised to come back in 4 years with her son (he’ll be 18 at that time)  & we really hope she does!