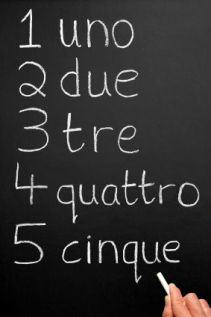 One thing we’ve really had on our minds is: what language will the baby speak?  Not only are we asking ourselves this question, but everyone else is asking us this too.  This is actually something we didn’t question too much because it’s obvious that we live in Italy and therefore, the baby will speak Italian.  She will be going to speak Italian to family, friends at school and at church.  This is something that will come natural to her just as anything else.

However, she will be a Dual-Citizen.  I will register her birth with the U.S. Consulate in Milano and therefore will also be American.  As an American, she must be able to speak English as well.  After all, when we go visit my family, she needs to be able to understand and speak to her family and friends there too.
I thought about the best way to approach this.  We had considered only speaking to her in Italian for the first few years until she starts going to school.  Then of course, she’ll learn grammar and be able to communicate with her friends and teachers.  Which at that time, I thought to introduce her to English and start speaking to her at home. I really thought that this was the best way to go about learning another language at home but there’s a bit of a problem.

I know for a fact that most kids are learning English as early as Elementary School.  I don’t want my child to be taught English by a teacher who doesn’t know the proper rules and who can’t pronounce things properly.  So, it was back to the research.
A few weeks ago, we went to dinner with some friends who gave me some great information.  They told me about a couple who was raising a bi-lingual child and what advice they were given by a child psychologist who specializes in bi-lingual families.  She recommended the OPOL method.  OPOL stands for One Person One Language.  OPOL is one of the most popular methods used for teaching 2 languages at home.  The concept is that one parent speaks one language while the other parent speaks the another.  Therefore, the child grows up hearing 2 languages from birth and learns each language as a mother tongue language.  So, by the time they start talking they realize that there are 2 different languages and each parent has their own language they speak.
Once I mentioned this to Carlo he was all for it!  We thought it was perfect for us.  He’ll speak only Italian and I’ll speak only English.  It’s also recommended that the child hear both languages from other people outside the home.  So of course, the Italian will probably become more natural to her as she hears it everyday and the English will be spoken when we call my family.
There are other methods we can use such as ML@H: which is Minority Language at Home.  This method is when everyone speaks the minority language at home.  I think this would be good if we were learning a new language together.  There’s also BPBL: Both Parents Both Language.  This is were both parents speak both languages.  For example, during the week we would speak Italian and on the weekends speak English….. or any other combination.  There are so many techniques but I think for us, OPOL is going to be the best.  Once she gets older, then we’ll try to introduce other languages like Spanish but for now, we’ll just concentrate on what she needs the most.

6 thoughts on “Q: What will our child be speaking? A: OPOL”