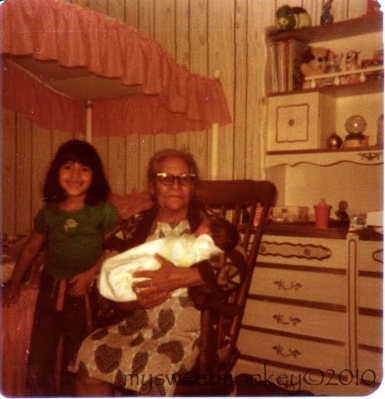 Abuelita Mendez (my mom’s mom)
When I was younger, I used to say that I wanted to be a teacher when I grew up. Then I realized that teaching is hard and I didn’t want to do it…. but as I grew up I knew what I really wanted to be.  So, whenever ANYONE asks me… I say, I want to be a Grandmother.  I always get strange looks from people when I say that but, if you have ever met any of my grandmothers, then you would know why.  They were AWESOME! I say were because they have both past away.
The reason I’m saying this is because a few weeks ago, I got a comment on Facebook that made me pretty happy but first, I have to give you the story.
I had told Carlo that I wanted to learn how to Crochet so that I could make a blanket for the baby.  He said his mother could teach me.   Well, Mamma Adelasia and I went to the mercato for some yarn but when it came time to teach me, I forgot the yarn at home and then she tells me that’s she’s not very good anyway. She can only teach me two things.  Well, when she gave me the needles, I saw that they were Knitting needles.  I told Carlo that I would learn how to knit but that’s not the same as Crochet.  I figured I would learn to Crochet first, AND then learn to knit because it would be easier that way.
So, I got on YouTube* and found some videos to get me started.  It took me 2 hours just to figure out how to get started with my cast-on row and then learn how to do my first knit row.  I think my problem is that the needles were really small. 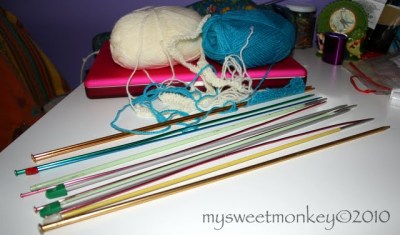 You can see all of the needles that Mamma Adelasia gave me. They range from size 2 – 4.5 mm.  After trying to work at it for a while, my hands were really starting to hurt.  I don’t know if you can see that well, but some of the needles are actually bent.  They are so old and quite difficult to use. 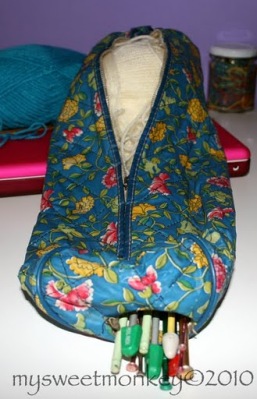 She even gave me this little bag to keep the needles and yarn in.
I haven’t been practicing or trying to make anything because it’s really hard to learn when the needles are small and the yarn is thin.  It’s not going as well as I thought.  So yesterday, I went to the mercato and bought some bigger needles and thicker yarn. 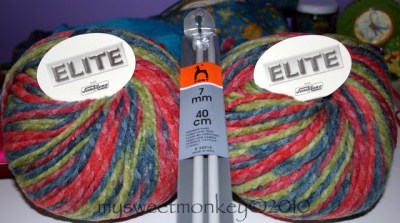 I thought the colors were pretty for a scarf.  So that’s what I’ll try to make first.
Now that you have the story, I can get back to the comment made. A few weeks ago, when i started to learn, I posted my status on Facebook.  A friend of ours made a comment and well, here’s how that conversation went:
Roberto:be careful.. you are just starting the process to become a real old-fashioned italian lady!! 🙂 The next step is learning to make a real good tomato sauce..
Sonia: hahaha.. Roberto, posso fare, la pizza, crostata, sugo per spaghettini, peperoni arrostiti, pomodori secchi e crocchette. Credo che io sono già vecchia!
Roberto:The question now is: where are you inviting me for a dinner???
I think my Abuelas would be very proud of me for trying to learn so many things so that I can then pass them to my children.  Both of my grandmothers past away when I was still young. Abuelita Mendez died in 1991 & Abuelita Fina died in 1992.  I remember so much stuff that they used to do but unfortunately, I wasn’t able to learn their secret recipes or sewing techniques.  So, now it’s up to me to learn and keep passing the tradition.
**translation: I basically told Roberto everything I have learned to make so far. Recipes can be found on our Main Blog.

*This is the video I found that really helped me a lot. After watching this, it took me 10 minutes to start knitting!

I also went to her website to learn more about knitting:
Knitting Tips by Judy

One thought on “When I grow up, I wanna be like….”